What
Visiting exhibitions
Where
Razstavna hiša
From
TO

The Prekmurje Hungarians have preserved a rich heritage of Easter customs, with decorated eggs – that small treasure of Prekmurje folk art – as an important element.

In this ethnically mixed area, a particular place is held by Dobrovnik decorated eggs, which have a tradition going back more than 150 years. In the settlement of Dobrovnik there are a number of producers, both male and female, who apply a traditional technical and ornamental approach involving the batique technique, scratching and decorating with leaves.  Dobrovnik decorated eggs feature simple, archaic patterns such as straight lines, flowers, ribbons, candles, the cross, inscriptions such as 'Hallelujah' and 'In memory of', and the year. They are one of the recognised elements of the local and regional identity of the Hungarian minority in the Prekmurje region; knowledge about their production and decoration is passed on to younger generations via books, exhibitions and workshops.

The exhibition features more than two hundred decorated eggs, made using different techniques and decorated with traditional, archaic patterns that are characteristic of Prekmurje and other areas on the Pannonian Plain. They were made by members of the Petőfi Sándor Cultural Society, Dobrovnik, where there are 30 producers of decorated eggs. Some of them have already received the title of folk craft artists in Hungary, while two have been entered into the Register of Intangible Cultural Heritage of Slovenia as bearers of the tradition of making Prekmurje remenke, as they are known locally.  The exhibition also contains dozens of decorated eggs from Hungary, as well as examples made by members of the Hungarian minority in Transylvania (Romania) and Ukraine.

Since 2011 the Slovene Ethnographic Museum has been performing the role of the national Coordinator for the Safeguarding of the Intangible Cultural Heritage in the Republic of Slovenia. Its responsibilities include preparing proposals for entering units and bearers in the Register of Intangible Cultural Heritage kept by the Ministry of Culture. The registered bearers include Eva Tivadar and Elizabeta Urisk, who make Dobrovnik decorated eggs (http://www.mk.gov.si/fileadmin/mk.gov.si/pageuploads/Ministrstvo/Razvidi/RKD_Ziva/Rzd-02_00041.pdf).

The exhibition Hungarian decorated eggs from Prekmurje at the Slovene Ethnographic Museum is the result of an initiative and support from the Hungarian self-governing national community of the municipality of Dobrovnik – Dobronak Községi Magyar Önkormányzati Nemzeti Közösség, the Pomurje Hungarian self-governing community – Muravidéki Magyar Őnkormányzati Nemzeti Közösség and Bethlen Gábor Alap.

The exhibition is part of the museum’s programme in the European Year of Cultural Heritage 2018.

Decorated eggs at the exhibition were contributed by: 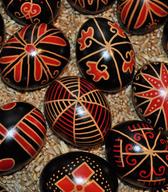