During the summer of 1850 the missionary Dr Ignacij Knoblehar (1819 – 1858) returned to Ljubljana from a long journey, all the way from Khartoum in Sudan. He brought home a precious cargo: more than three hundred objects from his journeys to the African interior. In Ljubljana, Knoblehar prepared the first African exhibition, as he wanted his fellow countrymen to see some of the everyday items used by the people from south Sudan. Knoblehar's missionary activity among the Bari people made a great impression on the people of Slovenia. Thanks to the daily press, Slovenian people could, for almost a decade (1849 – 1858), read about the mission in Sudan and for the first time in history, learn about African culture. Knoblehar's African collection is currently located at the Slovene Ethnographic Museum and characterises a short period from the mid-19th century and reminds us of the first contact Europeans made with the people of the White Nile. The example of the young missionary was followed by other Slovenes and the tradition of missionary activity is still very strong in Slovenia. Until the mid-20th century, Africa was visited not only by missionaries, but also the occasional visitor with other reasons. Anton Codelli (1875 – 1954) from Ljubljana travelled to the German colony of Togo with the unusual task of constructing a radiotelegraph station for the company Telefunken. He was successful, and in 1914, for the first time in history, a wireless connection was made between Africa and Europe. It is less well known that Codelli was also the producer of a film entitled The White Goddess of the Wangora. The film was shot in 1913, and a year later, after being shown in London, it disappeared without a trace. 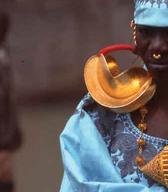